This resort is well known by Canadian travellers. Situated in the heart of the quaint village of Guardalavaca, offering fun and comfort. Two types of accommodations are available, standard rooms and spacious villas. 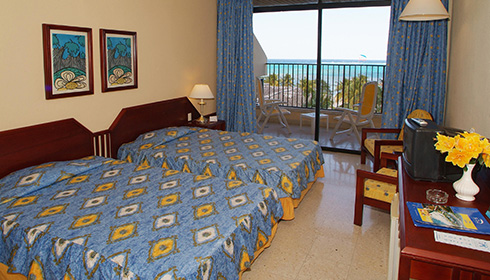 Age range: 4 to 12
The age range below will determine the quantity of children during booking.
Check-in time: 3 p.m. 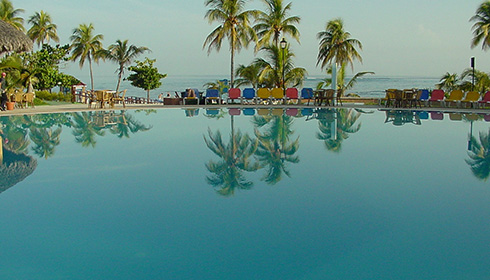 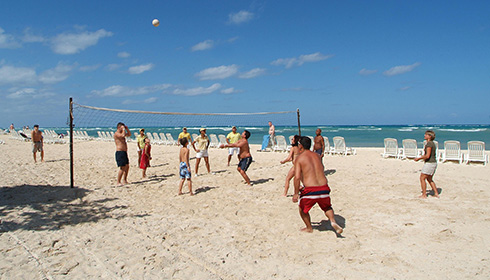 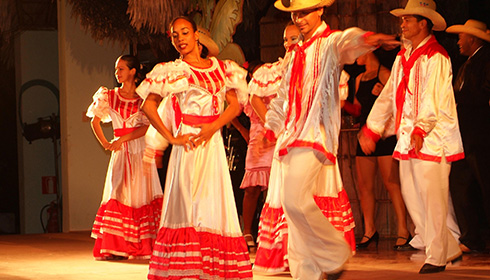 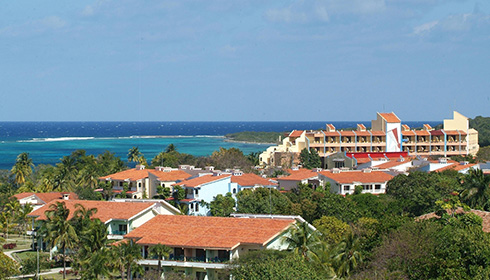 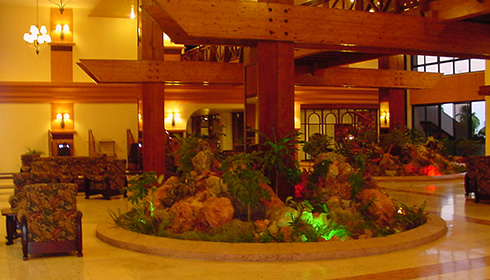 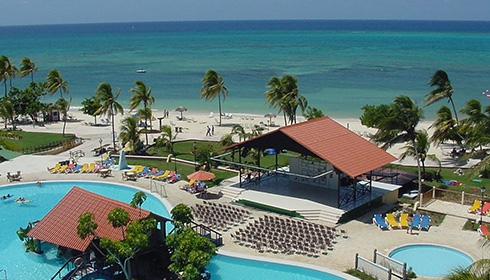 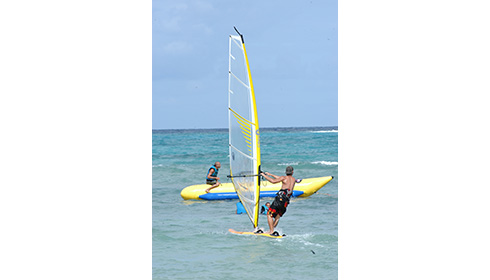 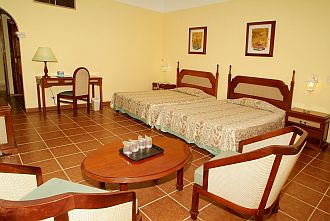 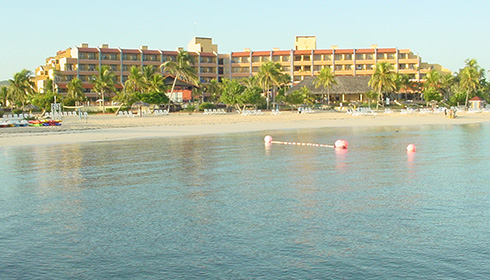 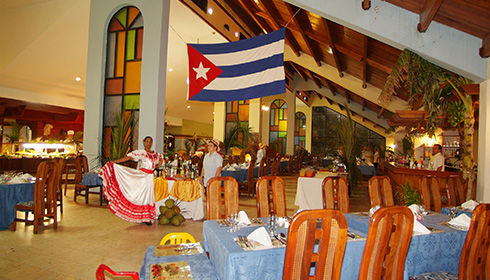 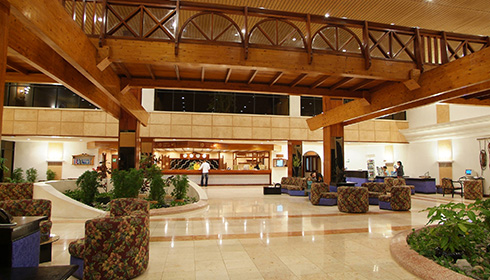 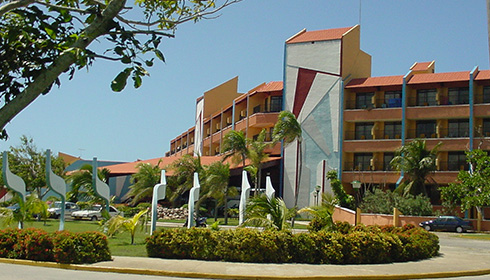 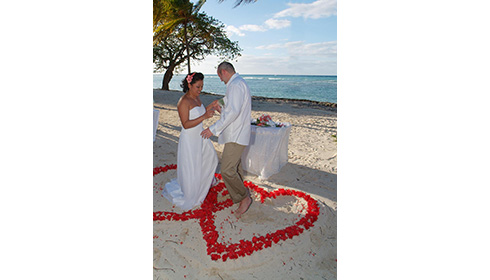 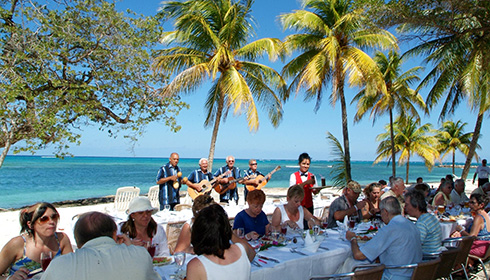 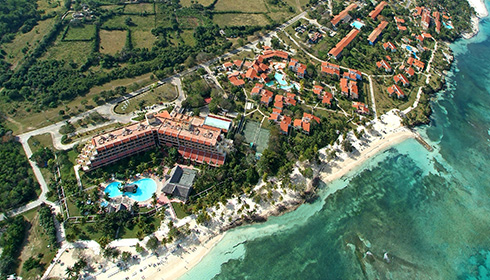 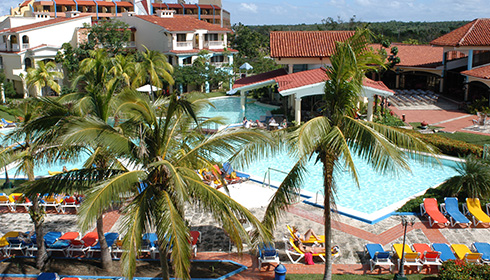 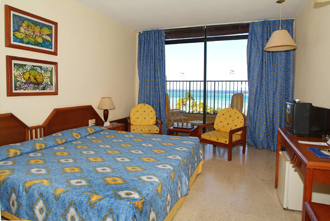 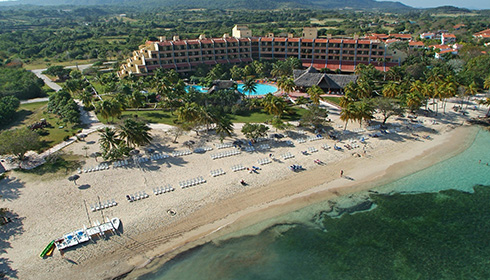 First time back to the Guardalavaca area in a many years. I had heard that this was a grand resort and it lived up to it's name in many ways and did not in a few. First impressions were mixed. The lobby was grand and has a nice little bar to wet the whistle at. The room seemed more dated than what I expected. Some of the lights would work one night but not the next. Musical light bulbs perhaps? The beach is a beaute. Long and full of soft white sand. The guys at the snorkel shop were a good source of knowledge. Many palm trees to shade under. The water was a tad cool and sometimes a bit murky but it served it's purpose. The buffet was a bit of a bore, I expected more, but the A la cartes were quite fine. Some late night cruddy snaks were to be had for those who needed. The hotel would periodically run out of certain wines or soft drinks but we didn't go thirsty. Quite enjoyed the 4th floor Rum bar at sundown. The animation team were spectac at keeping the guests entertained and that is good considering there wasn't much else going on in the tiny town. The hotel has a couple of nice pools to experience. The music however did not reflect the crowd very well. Way too much modern tripe for an older crowd. Worn out bicycles were available for free use. The front desk were a mixed bag of nice and sometimes nice. The cadeca as per usual in these hotels wouldn't supply receipts. The broad must of made a killin'. Overall quite enjoyed overselves even in that somewhat stagnant atmosphere of resort life. Ate and drank plenty! Beautiful people in Cuba!

A few notes to consider when reading this review: (1) This was my 3rd time at the resort, travelled with family that has been over 40 times to Brisas Guardalavaca; (2) We all know about the current economic & geopolitical situation affecting Cuba, it's worth looking into if you're not familiar. Brisas has become a very comfortable property to visit for my family. From the front desk staff, to bartenders, to groundskeepers, and everyone in between -- the staff here will go the extra mile to make sure you're enjoying your vacation. They fully understand that there are areas that Cuba is lacking in, but they'll always make an effort to make you feel like a VIP. I had the luxury of travelling with a couple of actual VIP returning guests, but there was no noticeable drop-off in service across the board. If you're looking for a quieter, more relaxing trip, the Villas are where you want to be. There's a la carte dining close by, a separate pool and swim-up bar, and easy access to the beach. To be more in the action, the main hotel has its own pool, bars and restaurants, as well as an entertainment team and music throughout the day. Flexibility to bounce back and forth makes it easy to have the experience that you want. The food in Cuba is never "amazing" -- but it's not as bad as people would have you believe. If you're looking for an abundance of over the top, five-star dishes, you'll never find that in Cuba. If you're eating like a regular person with 3 meals per day and some snacks -- this is more the vibe you'll get. Admittedly, buffet options were a bit limited -- they do what they can with what they have, and it's not going to win any awards. Mixing in a la carte restaurants and not trying to eat every item at the buffet at every meal will make for a much more enjoyable experience. Overall, a visit to Brisas Guardalavaca is a great, relaxing vacation. That being said, I have to comment the on-going "scam" that seems to be shining through here. As noted by both S_A_E122 (we were alert because we read their review before going, thank you!) and V L (who seemed to be there at the same time as us) -- be very wary of the cleaning staff and the towels. We were staying in the villas, and faced the same issue TWICE (again, we were with guests who had been over 40 times...still didn't stop the staff from trying). We had a family of 4 staying in 1 room and a couple in another -- because of size and views, they decided to switch rooms and made note of how many towels were in each room. 5 towels moved with the family of 4 and 3 towels with the couple. Despite letting the front desk know of the switch, and telling the cleaners multiple times, I was there as one of them confronted my mother in her room about stealing a face towel. My mom pointed out and showed them the towels and looped in all of the staff that she had informed. The maid continued to accuse her of stealing a towel, despite us counting out the total quantity that was accounted for. This was immediately reported to guest relations and the GM -- we even made a point to let them know that this is on the internet and is an ongoing problem. Two days later, a single guest in our group ran into the same situation, with the same cleaner accusing her of taking a towel, despite her counting out and showing the full quantity of towels. We raised this again (obviously there's been no discipline, or actual looking into the situation) and she was left alone. The third, "near" occurrence came when trying to switch beach towels, a group of 4 asked the cleaner, who responded she could give them 3 now and 1 later -- immediately they said no, knowing exactly how this would go. For myself and my guest, we ended up using the same towels for a week, we weren't playing that game with them. Extra disappointing because we tipped every other day, and brought along clothes, candy, everyday goods, etc. to gift to staff around the hotel -- my parents have done this each of their 40 times there. On a previous trip (2 months ago), my mother was accused to taking a towel but not confronted at the hotel. It wasn't until she tried to check into her flight at the airport that they demanded she pay $13 USD for the missing items...which weren't missing at all. Be aware, be vigilant -- everyone is trying to squeeze money out of you in some way in Cuba. This put a damper on an otherwise great experience, but we're trying to view this incident as separate from the larger trip. On the topic of 'scams' in Cuba -- unrelated to this hotel we ran into another situation with airport gate agents accepting bribes. My guest and I were nearly removed from an Air Canada flight that we checked into in advance, and paid for seat upgrades on, because a Cuban guest on Standby paid the Gate Agent $40 CAD. We watched it happen, and then watched our seats (18B and 18C) be given away as we tried to board the plane. Not related to this hotel, but something to be aware of when travelling to Holguin.